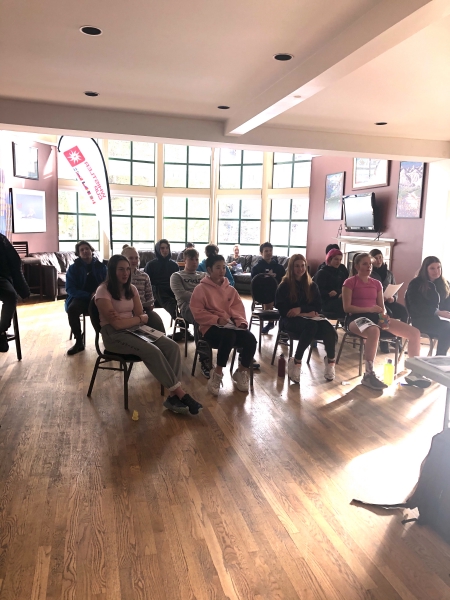 “In the book Grit, Angela Duckworth highlights that “the most dazzling human achievements are in fact the aggregate of countless individual elements, each of which is, in a sense, ordinary”. In other words used by the U18/U21 program, excellence in skiing is a collection of simple things done savagely well. This sport demands attention to details in order to keep safe, competitive and, at times, mere hundredths of seconds ahead of competitors. The miniscule margin means every aspect of this sport needs appropriate attention. The season, WMSC has utilized HeadStartPro Performance Training to address the often under-appreciated mental aspect of ski racing with the goal of maximizing focus, awareness, mindfulness and performance for both athletes and coaches.

HeadStartPro Performance Training is designed to help “prevent the critical errors and decisions compromised by rushing, frustration, fatigue, and complacency”. This resource is helping establish new tools in our mental toolbox, while polishing pre-existing ones. It has provided an organized platform and mutually understood language in order to recognize, communicate and address mental states and subsequent mechanisms for change if necessary.

On Saturday February 22, 2020, the U18/U21 Program sat down for their second HeadStartPro Performance Training session. Reflecting on the opportunity, Conrad Pridy said, “I think it’s really nice to have it all laid out and organized with terminology and everything. I don’t think it is necessarily brand new material, but in this format it’s much more user friendly. The athletes are using the techniques to self-monitor and ‘self-trigger’ even after only two sessions, which is a nod to its accessibility”.

The gist is the State-to-Error Pattern. Certain physical states typically lead to 4 types of errors that increase risk to performance. HeadStartPro Performance Training teaches individuals to “rate their states” on a scale of 1-10 for how much rushing, frustration, fatigue or complacency is a present influencer of performance. This awareness enables the individual to then employ HeadStartPro Performance Training mechanisms to “self-trigger”, changing their states that might lead to critical errors and impaired performance to ones that encourage their peak-performance zone.

Like anything, practice makes progress. HeadStartPro Performance Training has provided a step-by-step mechanism that coaches and athletes can use to keep the mind appropriately engaged. The end goal is to minimize risk and maximize performance. We have already seen progress being made in terms of awareness of states which leads to an opportunity to intentionally encourage peak-performance zones, and are looking forward to more occasions for practicing using these self-management tools.”