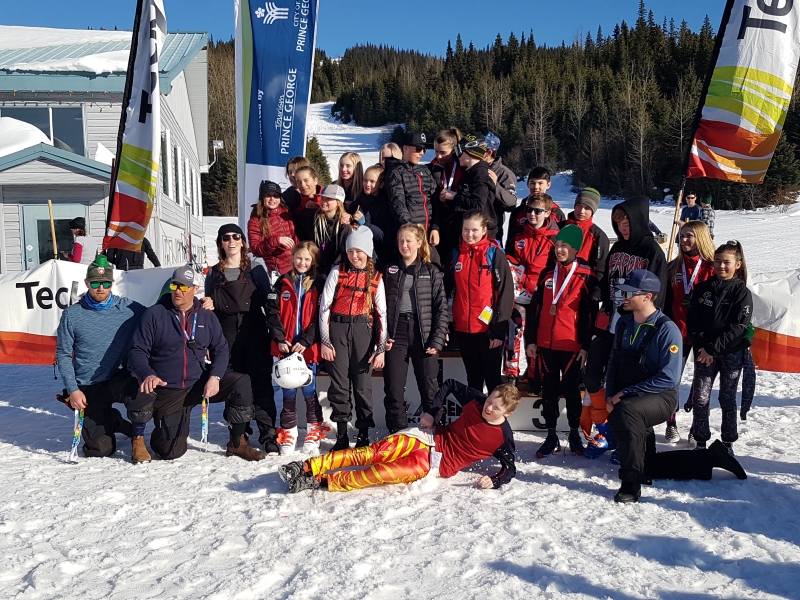 It was another big road trip to Provincials this year for the U14 athletes. Clear driving conditions made the 8 hours pretty smooth and scenic, a first-time route for many of the convoy of parents and athletes driving up to Prince George through 100 Mile House, Williams Lake and Quesnel.

Athletes, coaches and parents alike all commented on the amazing venue at Purden. A legacy of the 2015 Canada Games hosted there, the club and hill had the opportunity to put some grant money to good use by widening the race hill and blasting out some large rock sections to lengthen the run. They were able to upgrade race equipment and timing facilities too, making the venue really well suited for both SL and GS with good fall-line and lots of challenging terrain.

Weather was mostly sunny throughout the weekend with temperatures starting off cool and then warming up through the day. Race conditions were pretty solid, but came with the challenges that result from warm afternoon sunshine! The Prince George Ski Club was ready though and, with the help of a terrific volunteer crew, hosted 3-days of fun, well-organized races.

172 athletes from 19 clubs took part in the Provincial Championships this weekend, racing in Slalom, Giant Slalom and then a Team Dual Slalom that combined racers from a mix of clubs onto 32 teams.

Coach Bob Armstrong was among the first to comment on how well-suited the location was for these races. “This is an absolutely fantastic venue,” he said, “I don’t think any of us expected this kind of hill.” He went on to say he was proud to see “the amazing effort put in by all of our athletes this weekend.”

After a solid season of training ahead of this provincial Championships, more kids were really sending it, seeking that next gear instead of playing it safe, and clocking some impressive times.

WMSC athletes showed they were here to race! Led by Whistlerites Alexa Brownlie and Felix Shorter who owned the podium this weekend, there were awesome performances by so many different athletes, showing a real depth of the team (and the results of many hours of hard work by our coaches! Shout-out to Bob, Henry, Johnny, Chloe, Rob, and Scott, all a very big part of this weekend too.)

Day 1 was slalom and both Alexa Brownlie and Felix Shorter wore bib #1 and won both runs, each taking gold at the end of the day. Brownlie’s combined time of 1:41:50 was a solid couple seconds ahead, but she shared the podium with teammate Erin Husken who earned the silver (1:43:91) ahead of Apex’s Molly Raymond (1:44:65). Sarah-Elizabeth Whelan also put in a great performance, finishing 10th, and 1st year Lola Gilbert skied to 23rd place from bib #60.

Saturday was Giant Slalom, again cool temperatures in the morning that quickly warmed up, making snow conditions quite different between runs. Felix Shorter again dominated the field, winning first run by over 2 seconds and claiming top spot with a combined time of 1:40:31 followed by Baptiste Cais from the Black Dogs team (1:43:11) and Revelstoke’s Reed Kelly (1:43:50). Just 11/100ths of a second off the podium was teammate Milan Novak (1:43:61) who was just ahead of WMSC’s Alec Waldrum (1:44:37). JJ Gibbons put in another fast day with a 9th place finish, and Evan Dennison came 21st. It was tough day for WMSC’s Jack Thomas, 6th place after a great first run but down with a crash in the 2nd.

When asked what lent to his podium successes this weekend (besides the great skiing and all of the training he’s put in this season of course!), Shorter gave credit to his dad for being “really good at tuning my skis.”

In the ladies GS, times were very were close after first run, with 1st and 5th places separated by half a second. Izzy Bexton clocked 3rd fastest time 1st run but disappointingly DNF’d on her second. With 2 runs tallied, it was Apex’s Samantha Lawlor who won with a combined time of 1:43:93 followed by teammate Sienna Blaaser who tied WMSC’s Alexa Brownlie with a time of 1:44:86 for the silver. WMSC’s Ella Kauffman scored a Top 10 finish in 7th place, just ahead of Erin Husken in 9th and Sarah-Elizabeth Whelan in 12th. And 1st year Viveka Deck-Stang, starting in 64th, climbed her way up to a 20th place finish after charging both runs and was followed closely by Vanessa Young who placed 24th.

Perhaps one of the most impressive finishes of the weekend was that of Forrest Savoy who unfortunately DNF’d first run in the GS but was allowed a consolation (training) run after the last racers in the 2nd run and who, after losing his ski on the third gate, skied the entire GS in one ski!!!! Asked Sunday how that leg was feeling, he admitted “it’s pretty tired” but that didn’t keep him from racing all the way through to the finals with his Dual Slalom Team, capturing second place in that team event at the end of the day.

A number of WMSC racers were among the top 3 teams after a very competitive dual slalom day, filled with loud cheering, fast skiing, and the best weather day of the weekend. Congratulations to Heidi Schenk, Forrest Savoy, Jackie Smith, Marlow Parkhill, Alec Waldrum and Alexa Brownlie for making it to the final rounds of this exciting event! Asked what was more tired, the legs or the arms after being towed up the hill by the sled for the last few rounds, most racers answered “hungry!” with a smile.