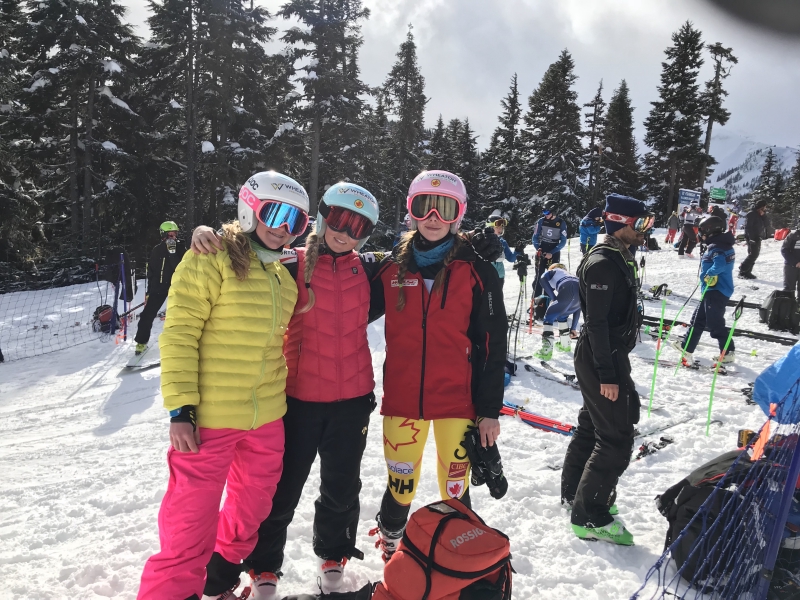 WMSC FIS athletes took part in last week’s BC Cup series at Whistler-Blackcomb and Grouse Mountain. Over 80 athletes competed, mostly from BC and Alberta but some coming from as far as Mammoth in California, and organizers responded effectively to the changing weather patterns and managed to get all 6 races off despite some of Mother Nature’s finest!

The first schedule change was on Day #1 when it was decided at the Team Captains’ meeting (previous night) to run both Super-G races initially planned to span over 2 days. Conditions were a bit soft to start but racers soon got to the rock hard base underneath and the track remained fast through most sections. Starting from the top of Raven, the day started off with a celebrity forerunner by the name of Rob Boyd setting the pace, and the race continued to be exciting throughout the day.

In the Ladies race #1, Sunshine Ski Club’s Kiara Alexander ripped down the course and beat the 2nd place finisher by nearly a half second. Whistler’s Gigi Kranjc placed an impressive 7th, and teammate Julia Ross finished 12th, just behind WMSC alumni Gabrielle Smith who now skis out of Mammoth (big sis of Jacquie in U14). In the 2nd race, Kiara’s sister Ashleigh took top spot on the podium, and Julia Ross claimed her first top 10 of the series, finishing 9th

On the Men’s side, first race, Tyler Werry set the pace with a time of 1:13:25, and Whistler’s Jack Forsyth turned in his first top-10 of the series, placing 8th ahead of teammates Kosta Petovic (17th) and Dawson Yates (21st). 2nd run saw Forsyth turn in an 11th place finish and Yates move up to 18th.

FIS coach Conrad Pridy felt the series was a big success for his athletes. “The team, as a whole, all managed some form of personal best performance, and looked a lot more comfortable racing than earlier in the year. I think having a solid 4-week training block before our home series was a very effective way to prepare, but more noticeable than the technical changes our athletes made was their ability to execute when it really mattered. They’re starting to believe in themselves and “let go” more under pressure.” “The whole FIS points thing can become a huge distraction, when what really matters is beating people. It was nice to hear reports from the kids after their runs that focused on how they skied and how many spots they moved up, rather than what they thought their points would be. Hopefully we’re getting back to what racing really is!”

The first GS race, scheduled to run on the Thursday, was moved up ahead of the forecasted snow and took place on Wednesday, starting just above the Club 21 pitch. Conditions were probably the most challenging of the 3 race days at Whistler, but that’s ‘normal’ for any WMSC athlete, so results were still pretty solid (thanks in part to medal-deserving efforts of the course crew!) First-year FIS athlete Gemma Bexton earned her first top-10 result finishing in 8th place ahead of teammates Julia Ross (10th) and Gigi Kranjc (11th). The Men’s event was won handily by former WMSC (now BCST) racer Alexander Valentin, nearly 2 seconds ahead of the next finisher. Kosta Petkovic finished up in 11th position, while teammate Griffin Brumec-Parsons came from the 40’s to place 15th! For Conrad, these results marked a couple high point of the week: “Griffin and Gemma, our “underdogs,” lead the charge on day one of GS. They kept any nerves they had in check, brought their best skiing from training to the race, and put 2 great runs in the barn.”

At the Team Captains’ meeting on Wednesday night, all three major weather forecasts called for significant amounts of snow, so Chief of Race Graham Ross called for Plan P…as in powder…for Thursday (a very well supported decision!) Most athletes chose some very different lines from the previous day, and were observed all over the resort, from Spanky’s to 7th to Harmony. It was a memorable break for a lot of them from the intensity of the race days, especially for some who’d never been to Whistler before!

Then Friday cooled and cleared and the racing was back on for day #2 of GS. BCST’s Kristina Natalenko made it clear it was going to be her day, winning both runs and finishing nearly 2.5 seconds ahead of the next racer, teammate Frances MacDonald. Whistler’s Gigi Kranjc and Julia Ross again finished close to one another, placing 11th and 12th respectively. The Men’s event was again won by Alexander Valentin, and Whistler teammates Jack Forsyth and Dawson Yates (ahead after first run) battled it out through second run to wind up 10th (Forsyth) and 11th (Yates).

At the completion of Friday’s event, tear down and on-hill awards, athletes then had to shift gears in preparation of two days of slalom racing at Grouse Mountain where the BC Cup series continued. Conditions were more of a challenge in terms of keeping the race course consistent, with soft snow and varying visibility throughout the weekend, but the Tyee Ski Club was well equipped to manage what Mother Nature dished out, and, despite numerous DNFs, both race days were run and most of our club kids wound up with results that’ll lend to better start numbers next series.

On the women’s side, it was unquestionably BC Team’s Kristina Natalenko’s event as she claimed the silver and gold medals, but the Whistler gals held their own, not only finishing the race (unlike approximately 50% of the field both days), but for Gigi Kranjc, scoring 9th Saturday and 10th Sunday, Gemma Bexton 11th both days, and Julia Ross a 9th place on Sunday….and even more spectacular was her 3rd place finish in the 2nd run of day 1 after some, well….complications in her first run!

Said her coach, Conrad, “Julia’s second run domination in the SL races at Grouse was another incredible highlight of the series for me. Two days in a row she upped her intensity on second runs and came close to winning the run both times. Exciting for her, but on a bigger scale very exciting for the whole team to see that aiming for the top step isn’t unrealistic at all. On a level playing field (ruts and fog) they’re all just as fast as the guys and girls they’re chasing. The timing couldn’t be better for things to start coming together on race day as we head bravely into March Madness!”

The men were led by WMSC alumni-now-BC Team athlete Asher Jordan who won both days’ races. On Saturday, WMSC’s Kosta Petkovic made an impressive leap from 10th spot after first run to finish in 5th position, and Dawson Yates earned a top-seed result as well on the Sunday, ending up in 12th.

Congratulations to all of the Whistler FIS athletes for their performances during last week’s series, and thanks to the coaches who put in even longer hours to help make it all happen. Now it’s back to school and a week or so of training before the next couple of stops on the ‘tour’ including the Canadian National Championships at Red Mountain in Rossland, BC March 21-25 and the Western Spring Series at Panorama April 3-8.

For full results, click the links below and/or go to: http://bcalpine.com/news/