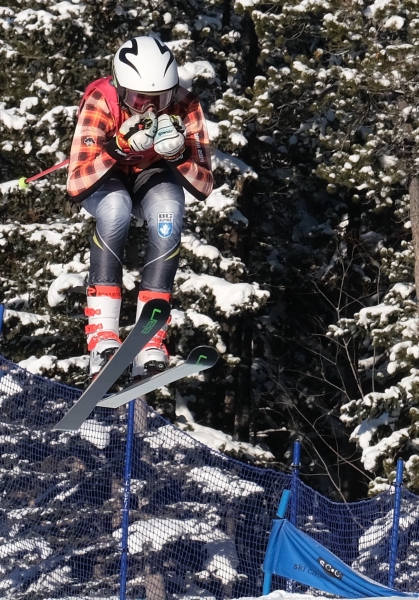 While the rest of the WMSC FIS team is away at Panorama and then on to Lake Louise, two members of the team have been traveling in a different direction this winter. Emeline Bennett and Nick Katrusiak are chasing Ski Cross races across the country and beyond. Nakiska Ski Area is the new home of a training centre for the Canadian National Ski Cross team. As a result, Em and Nick have spent a lot of time on that hill training this season and have already participated in four Nor Am races there.

The first Nor Am weekend was in December and the second was in January on the same track as the World Cup that was held only days before. “The post-World Cup track was way longer and the features were significantly bigger than the event in December. You really had to know how to handle yourself in the air and how to make the most of very tricky passing opportunities.” said Nick Katrusiak who had an excellent result, making it to the Small Final and finishing 8th. The result was all the more significant because the National Team stayed at Nakiska to participate in the event before traveling to Beijing, skipping the World Cup race in Sweden before the Olympics. “It was very exciting being in the start gate for the Small Final with a bunch of National Team members: Chris Del Bosco (former World Champion), Kris Mahler (World Cup Winner on the same track just days before) and Carson Cook! I knew I didn’t have much of a chance to beat them, but I wanted to stay with them and finish as part of the pack.” Nick’s friend Callum McEwen (brother to SX National Team member Abbie McEwen) was the only other non-national team member to make the Finals and finished in 3rd place (Reece Howden took 1st and Jared Schmidt placed 2nd).

Em Bennett has also had a fantastic season so far. At the December Nor Am she made it to the Big Final, finishing 4th. At the January Nor Am, Em also had to contend with 4 National Team women who stayed for the race and who filled all the spots in the big final. Em finished in 6th place overall against veteran Alberta Alpine team members in the Small Final. Both athletes also competed at the most recent Nor Am at Calabogie Peaks Resort near Ottawa. Nick made it to the Small Final both days collecting a 6th and 5th place. Em finished 6th on the first day and won the gold medal, finishing first in the Big Final on the second day.

Emeline, now 18 and finished high school, headed to Europe this week to participate in some Europa Cup races and will be gone for a month and a half. Nick, 17 and finishing grade 12 at Whistler Secondary, continues on to Gore Mountain, NY later this week for another Nor Am and then will head back to Whistler to squeeze in some classroom time before participating in the FIS alpine events at Grouse and Whistler scheduled for the end of March. Both athletes are waiting to hear if they will be invited to represent Canada at the Ski Cross World Juniors in Italy at the end of March. Considering their results, they both have a very good chance.