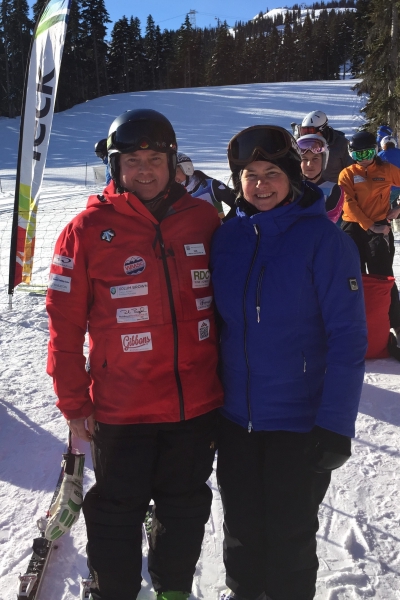 For the past 49 years Chris has been involved with the Whistler Mountain Ski Club.
Chris has been able to transfer the knowledge and experience as a racer to coaching with WMSC in the 1970s and then to being a parent, a volunteer and board member.

Chris has worked at the club since 1999 and was the club administrator from 2010 until 2019. Chris has used her knowledge and passion for the athletes and the sport as the driving factor in how she has continued to contribute to the operations of WMSC and she has been instrumental in the development and evolution of the club to where it is just now.

Chris has also run other businesses during the time that she has been involved with the club, and as such she has been able to offer employment for racers in their off-season and many donations for fundraising events.

It has been a real pleasure to work with Chris and she always brings a calm, organized and welcoming presence to the club. Chris, along with her family, have continuously made enormous contributions over the years, and the Parsons speed camp and bursary have undoubtedly been key to the development of so many world class speed skiers coming from the Whistler Mountain Ski Club and BC.

With such an extensive time of involvement in the club, Chris has a connection to so many generations of WMSC athletes, parents and alumni and her contributions go much further than the WMSC. Chris is currently on the Board of the Vancouver Ski Foundation who make a significant contribution to our sport across the province and annually to the Whistler Cup. Even ‘Christine’s’ on Blackcomb is named after Chris!

I cannot thank Chris enough for supporting not only myself and Blanca into the club and showing us the ropes of how the club operates, but for the support that she has given to all athletes, volunteers and staff.

Chris will obviously continue to be involved with the club at special events and of course for the Parsons race.

Chris will be nominated as an honorary Club Member and we will also celebrate Chris’s contributions at the Alumni party in the new year when we will have a strong representation from each generation that Chris has known through her time with the club.

On behalf of the Club, I would like to thank and congratulate Chris for all that she has done for our sport and for what she has achieved in her time with the club and wish her all the best in her next chapter.

We need to have a celebration now, not in a few months!