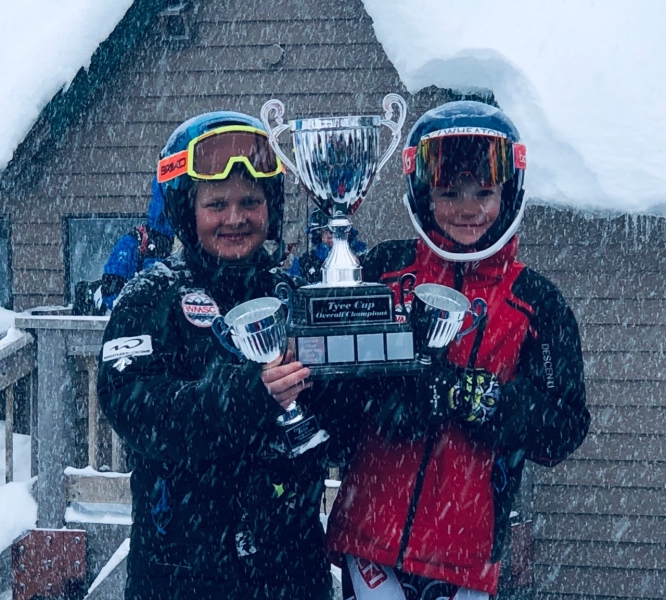 This past weekend the WMSC U12 team traveled to Grouse Mountain for their first and biggest away race of the season, competing for the coveted Tyee Cup. “Racing at Grouse Mountain provides a fun mix of challenging and flat terrain that tests each athletes ability to carry speed and then manage the steeps”, said Head Coach Mat Leduc. “The snow was a bit softer then we would have liked, but the course crew did a great job keeping it fair.”

Saturday, under a beautiful sunny sky, the first race was Giant Slalom with over 130 athletes competing. The women ran first and WMSC showed up strong and race ready, winning 6 of the top ten spots. Hannah Neeves was on the 2nd step, Maika Lennox-King in 3rd, Sophie Neevesn 4th, Alexa Ferguson 7th, Celeste Ciebien 9th and Anais Staniforth rounding out 10. Our men followed, winning the top 5 spots. Kingsley Parkhill edged out his teammate Dreas Gibbons, finishing 1st and 2nd respectively, and to sweep the podium, Liam Gottfried was 3rd. In 4th, Graydyn Swanson and Dominic Reid was 5th.

As the sun heated up and the snow softened the Kombi was next. The athletes had to review their tactical game plan for this tricky set and conditions. In the end 6 WMSC females were in the top 10. This time Alexa Ferguson set a blistering time finishing 1st. Ciebien was 2nd, Hannah Neeves 3rd, followed by her sister Sophie Neeves in 4th. Staniforth was 6th and Lennox-King rounded out in 9th place. The boys moved into the start gate and Graydyn Swanson finished 3rd, Reid was 4th, Declan Kirker finished 7th and in 10th place was Marek Novak.

Sunday with slightly cooler weather and overcast skies, racing continued. First up was Stubby Slalom. Again, a tactical plan was going to play a big role in the day. It paid off and Head Coach Mat Leduc commented on how all our athletes registered personal best skiing. Our females swept the podium. Ferguson and Ciebien again taking 1st and 2nd, followed by Sophie Neeves in 3rd. Hannah Neeves 4th and Lennox-King in 6th. The men won 7 of top 10! Dreas Gibbons was on point, taking the win, followed by Parkhill in 2nd. Swanson was 4th, Novak 5th, Gottfried 6th, Luka Buchheister finished 8th and Spencer
Wardle was 10th.

Going into the last race, the fog was rolling in. Re-focusing on the new Slalom tall gate course our coaches prepped and race readied the athletes. Hannah Neeves skied a clean race to 1st place. Her sister Sophie tied for 6th and Celeste Ciebien was 8th. With 72 boys to still race, WMSC powered through and swept the podium, and 6 of top 10! Parkhill finishing 1st, Novak 2nd, Swanson 3rd, Reid 6th, Gottfried 8th and Cory Kwan finished 10th.

At the end of 2 days, results were tallied and WMSC proudly brought the Tyee Cup back to Whistler winning both the female and male titles. Hannah Neeves won best female, beating her teammate Alexa Ferguson by 4 points. Kingsley Parkhill won the male title with the most points for the weekend. Head Coach Mat Leduc commented on how much the entire team has improved. “I had many comments on how well prepared and knowledgeable our athletes were. This is a credit to their
focus in training and at races this season.” I would say a credit to their amazing coaching too!

Well done U12 and congratulations!