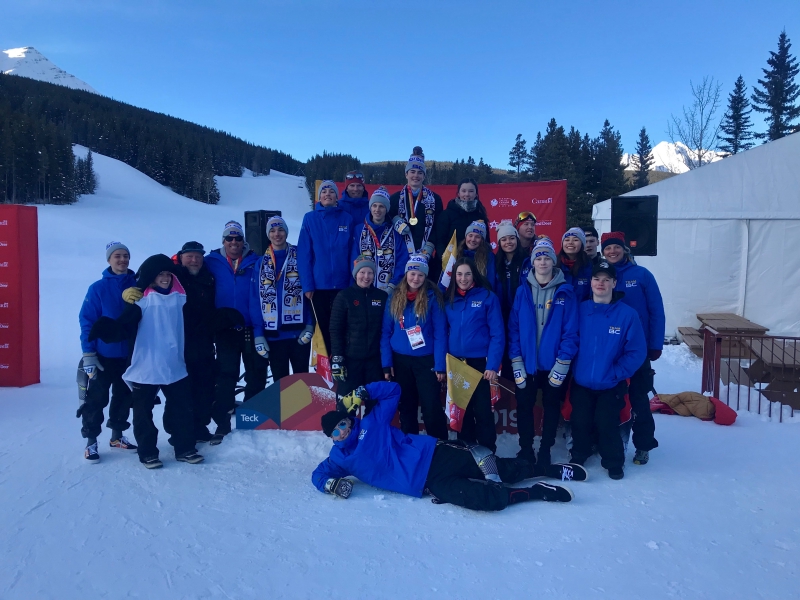 7 WMSC Athletes competed among Team BC for the 2019 Canada Winter Games hosted by Red Deer, Alberta with alpine skiing in Nakiska and Canyon Resorts.

Sunny skies and frigid -25C temperatures greeted team BC in Nakiska to start the Canada Winter Games last week. The event kicked off with a Super G that was described as short and flat with a couple of fun jumps. The short nature of the course (45 seconds) rewarded perfection and any small mistake made a top-10 finish impossible. The BC Team boys struggled with only Grouse Tyee’s big man Taylor Nellis managing to squeak into the top-10 with a 10th place finish. As for the contingent of WMSC boys, David Wood placed 17th, Matthias Shorter 25th, Chase Burns 30th, and Adam Usher had a fast run going but was an unfortunate DNF within a few gates of the finish. After day one team Alberta, Quebec, and Ontario announced themselves as the provinces to beat at the games. On the women’s side, there were 59 competitors, 7 from BC and 3 from WMSC. Our racers had tough competition from our host province and our eastern provinces of Quebec and Ontario as well, who took all top 10 spots. Our WMSC girls fought hard to the finish and all clocked into the top 30, with Jaden Dawson taking 11th, Sara Stiel 21st, and Fiona McInnes 28th.

Giant slalom was on the schedule for day two and the athletes faced a challenging course set on a slope with two very steep pitches separated by a gentle section in the middle. By the end of the day there were only 28 boys finishing in a field of 69 with the finishing pitch seeing most of the DNF’s. It was a physically demanding course with only 4 of the 7 BC boys successfully completing both runs. David Wood had a solid 2nd run and placed 10th, Matthias Shorter 12th, and Adam Usher and Chase Burns were both DNF’s on the first run. BC Team’s Apex Ski Club’s Hemming Sola put in an impressive 5th place in the first run but he was unable to finish his second run. Sola did however give the team reason to be optimistic about a possible run at the podium in the slalom that would be held the following day on the same tough slope. For the girls, 60 competitors lined up in the start gate but only 36 finished the 2 run race. Unfortunately Jaden Dawson and Fiona McInnes were two of the 24 racers who didn’t finish the race. Sara Stiel brought it in for WMSC and successfully put together two strong runs placing her 14th.

Day three of the games brought slightly milder temperatures of -19C in the morning and -8C in the afternoon. Just like the previous day’s Giant Slalom, the steep slope produced a high rate of attrition within the field with race sets that continued to test these top Canadian athletes to a super challenging slalom course. Sola gave the entire BC Team reason to cheer putting two fantastic runs together to take gold. Teammates Chase Burns, Matthias Shorter and Adam Usher also had strong showings finishing 6th, 10th, and 11th respectively. Unfortunately David Wood was a first run DNF but the entire team was ecstatic to finally break the podium juggernaut and show the other provinces that BC skiers know how to ski fast on tough courses. It was nail biting for the spectators to watch as 23 of 60 girls failed to finish the first run. With only 37 competitors starting the 2nd run, it was anyone’s race to win and by the end of run 2, only 23 of the 60 competitors completed the race. Our BC girls were amazing with 5 finishing in the top 12. Jaden moved up 8 spots after her second run taking 6th spot and Sara moved up 8 spots finishing in 11th. BC teammates Noa Rogers and Brynn Applegath made it in the top ten finishing 7th and 8th respectively.

For Fiona, she recalls that, “after each race, emotions were high and I don’t really remember how I felt about my results, but for the most part I was happy with my skiing. After crashing for the second time in the slalom I remember being frustrated with my own skiing but really thrilled for everyone on team BC who did well. Sara reflected that “each race had its own challenges but we would have really benefitted from training on the race hill. Its Alberta’s training hill and Quebec flew out in Dec to train it. We would have benefitted from that as well.

The final event of the Canada Winter Games was held at Canyon Resort about 10km outside of Red Deer. If the athletes thought it was cold in Nakiska, they were in for a rude awakening on race day in Red Deer. The venue change was also a big transition for the team as they moved from the swanky confines of the Kananaskis Lodge with 2 athletes per room, to the athletes village in Red Deer where it was 12 boys to a room and one shared bathroom!

The final event of the games was the ski cross and it would be held in -34C temperatures. There was a frostbite warning and the wind chill registered -40C. Fortunately there was a heated staging area where the athletes could find shelter but the slow fixed grip chairlift was a challenge for everyone. The boys battled hard on a course that was described as slow at the top and fast at the bottom but good fun all the way.

Hemming Sola proved he’s one of the fastest ski racers in the country scoring another podium for BC with a bronze medal performance. David and Matthias both made it through the first round of 64 but were edged out in the round of 32. Adam battled hard but bowed out in the quarter finals. Chase did very well to advance and win the small final to take a fantastic 5th place. For Jaden, all she could think about was how fun it was. “We never train or race SX and it was so exciting. At the bottom I gave my competitors fist bumps and we were talking about how exciting it was”. Jaden and Sara skied well but were also edged out in the round of 32.

It was tough competition for the girls and although they realized it was very competitive, they all agreed it was exciting to ski against the top athletes from across the country. It pushed them to skate harder out of the gate and reach further for the finish line. When asked what was it like competing against the top U16 skiers in Canada?, Sara succinctly put it, “I have work to do”. As parents watching, our kids gave it their all and left nothing behind and are proud of their grit during these games.

Conversations with the 4 WMSC boys over the course of the games revealed a common theme. They were all very proud to represent their home province and they were excited to make some new friends from across the country. For the girls, having the chance to meet and become friends with other athletes from across Canada and from other sports was also the highlight and to cheer on BC. For Fiona, "My most memorable experience from the games was the last night after the closing ceremonies. The whole week I was trading pins with athletes and volunteers from around the country trying to get a pin from every province but on the last night people started to trade everything from hats to team jackets and pants.”
Coach Drew Hetherington from WMSC was one of 3 coaches accompanying the BC athletes and he felt the games were anequally engaging experience for coaches as their athletes as they were immersed into the rare world of top level athletic competition due to the incredible settings the Games provided. The amount of production, volunteers, and attention for the athletes was staggering and the conditions for racing were perfect; our athletes only had to put their best efforts in. The competition however, insisted on bringing their A-game as well. After the first day, and some serious rounds of navel-gazing the next two days were much better. Our athletes rose to the challenge and competed well. The experience was very positive and the team gained invaluable experience. They can all go back to their clubs and share lessons learned with their friends.
Some of our athletes’ parents were lucky enough to observe some of the interactions…and know that the entire CWG’s crew of WMSC athletes and parents are fortunate to have some priceless memories to take with them on their journey in competitive skiing and in life. It was a once in a lifetime experience that they will never forget. They wanted to thank all of the coaches, parents, volunteers and organizers who withstood the freezing temperatures of -20 to -30, and supported all of us throughout the week.