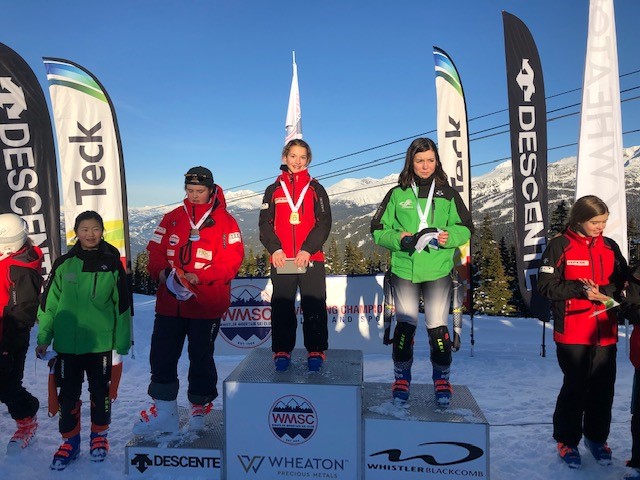 This WMSC hosted race was the first chance for the Coast Zone U14 athletes to square off against each other in an official manner, bringing our local athletes together with the Grouse/Tyee, Cypress, Seymour, Hemlock Valley Ski Racing Clubs, and from across the Salish Sea, the Mount Washington Ski Club.
The racers were faced with some challenging conditions on an equally challenging slope. The warm and soft conditions that racers faced on their Friday training session, turned hard and in places inconsistent with some ice balls on top of a hard, frozen base. However, that firm base held up so well that on both days the same courses that were set in the mornings were used for their 2nd runs in the afternoons.
In Saturdays Giant Slalom race, on the ladies’ side Cypress Ski Club’s Gaia Fameli took home gold with a winning time of 2:14.25. WMSC’s Sarah-Elizabeth Whelan was second with Grouse Mountains Cordelia Hultman coming in 3rd.
For the men, the local boys swept the podium with Jack Thomas taking the win in 2:05.35 while teammates Milan Novak and Alec Waldrum rounded out the podium positions. A local favorite Felix Shorter had a healthy lead after the first run but unfortunately had a ski pop off in one of the ruts in the second run just a few gates from the finish, knocking him out of Saturday’s race.
Sunday dawned clear and cold again with a better surface for the Slalom event. As always, slalom can make for some exciting action as the racers negotiate the quick, tight turns while knocking the gates out of their way. WMSC’s Erin Husken worked the magic of her small stature to take a commanding lead first run, which she easily held onto for a winning time of 1:43.18. Second place went to Cypress’s Sofia Blouin and Jacquie Smith of the WMSC took home Bronze.
In the men’s race Felix Shorter got his redemption (from the DNF in the GS) to take home a gold medal, winning the race in 1:40.75. Grouse Mountains Pearce Manning Avini, a 1st year U14 took silver and Jack Thomas (WMSC) took home bronze, his second medal of the weekend.
Most improved awards went to Viveka Deck Stang for both the ladies GS and SL events, while JJ Gibbons was the most improved in men’s GS and Pearce Manning Avini moved up the most in the men’s’ Slalom.
As always, a huge thank you goes out to Whistler Blackcomb for fantastic grooming and snow conditions, to the many parents and volunteers who helped to make the race weekend the success it was, to the clubs many sponsors and supporters that make amateur sport possible and our title sponsor for junior racing in Canada, Teck!