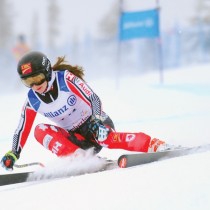 At the age of 18 Jepsen is on her way to South Korea for her first crack at the Paralympics, riding high after a huge weekend back in February that saw her hit the podium in three straight World Cup races, clinching the Crystal Globe overall season title for super G in the process.

The results are great, but what is most remarkable is what she has gone through already to get to this point in her young ski racing career. For Jepsen, who graduated from West Vancouver Secondary last June, the past four years have been marked most prominently by three massive injuries and the time spent recovering from them.

“I tore my first ACL when I was 13,” she says matter-of-factly. That was her right anterior cruciate ligament, torn during a scary training crash in Whistler caused by the young racer pushing her limits just a little too far, and it cost her an entire season of racing. She rehabbed hard, and made it back on snow. Her return lasted just one season.

When I was 15, I tore my second ACL.” That was the left knee, torn during a fluke accident while at a preseason training camp in Austria. “That was quite devastating after going through that kind of injury the first time and knowing how brutal and painful the rehab and surgery process might be. But I honestly just love skiing so much that I was just like, ‘OK, here we go again. I know what I’m doing, let’s get it done.”
She fought through it all to make it back on snow and then … broke her ankle. That was last February, at another training session in Whistler. For most mortals that would have been enough to hang up the skis for good, or at least take a long break from the sport. Not Jepsen though – she was back on skis in August and on her way to posting the breakout season she knew she had in her during all those years lost to injury. The physical rehab was gruelling enough – what was even tougher, though, was finding the mental strength to push her limits each time she got back on snow and came face-to-face with a steeply pitched slope.

“It’s a super, super rough mental game,” she says. “It takes a while to be able to trust yourself and not be scared all the time. But I have a super great support staff of physios, sport psychologists, coaches – they make everything possible. It’s definitely tough, and something I think every elite athlete has to go through. How you come out of it kind of shows what kind of athlete you are.”

This year Jepsen finally got to show what kind of an athlete she is, and it couldn’t have gone much better. The Paralympics start March 9 in South Korea, and the teenager is hoping to come away with at least one medal. Her last five years may have been rough, but she’s been preparing for this moment all her life.

Jepsen was born missing a few fingers on her left hand, preventing her from holding a ski pole in that hand, but that never slowed her down as she followed her family to the slopes on countless Whistler weekends, starting when she was just two years old. Following the 2010 Olympics she jumped into ski racing with the Whistler Mountain Ski Club, always competing against able-bodied athletes.

“I’ve worked my whole life to make it as if I had two poles,” she says. “I was coming from a gymnastics background, so the biggest part in only having one pole is are you able to balance well enough to ski turns on both legs? Many who don’t have one pole struggle to maintain balance.”

Working with one pole makes it tougher to push through the gates in slalom races, so Jepsen has shifted her focus to the speed events.

“I like to go as fast as I can,” she says, adding that her multiple injuries and rehabs have made her a more focused, precise racer. “I focused all of my energy on just becoming the strongest technical and tactical skier I could, and it’s now started to really pay off this season. I’ve been able to put down some really clean, fast runs. Finally.”

With two strong legs underneath her, Jepsen can’t wait to show the world what she can do at the Paralympics.

“The main goal, being my first Paralympics, is just to leave it all on the hill for each event each day, just ski as fast as I can and come off the hill knowing I did my best,” she says. “It’s a super awesome honour to be able to head over there knowing I’m representing Canada.”